The announcement above played live during the men’s basketball game vs. Pittsburgh at Cameron Indoor Stadium on January 20, 2018. 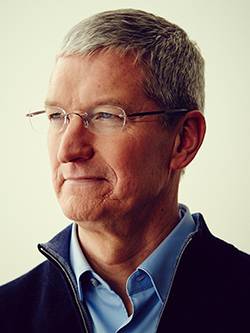 Apple CEO Tim Cook, a graduate of Duke University’s Fuqua School of Business and a member of the university’s Board of Trustees, will deliver Duke’s commencement address on Sunday, May 13, 2018.

Cook earned his MBA in 1988 from Duke, where he was a Fuqua Scholar, an honor given only to students who graduate in the top 10 percent of their class. He received a bachelor of science degree in industrial engineering from Auburn University in 1982.

Before being named CEO in August 2011, Cook was Apple’s chief operating officer, which made him responsible for all of the company’s worldwide sales and operations, including end-to-end management of Apple’s supply chain, sales activities, and service and support in all markets and countries. He also headed Apple’s Macintosh division and played a key role in the continued development of strategic reseller and supplier relationships, ensuring flexibility in response to an increasingly demanding marketplace.

Under Cook’s leadership, Apple became the world’s largest and most valuable publicly traded corporation while also being recognized as one of the most innovative.

Cook has been a member of the Duke Board of Trustees since 2015 and is a member of the Facilities and Environment Committee. He has also spoken with students at Fuqua, including a talk where he discussed what he learned at the school that has helped him in the business world.

In addition to his service at Duke, Cook serves on the boards of directors of Nike and the National Football Foundation.  Among his honors are the Newseum’s Free Expression Award (2017), Financial Times’ Person of the Year (2014), Fortune Magazine’s World’s Greatest Leader (2015) and the Human Rights Campaign‘s Visibility Award (2015).

Read the announcement on Duke Today »